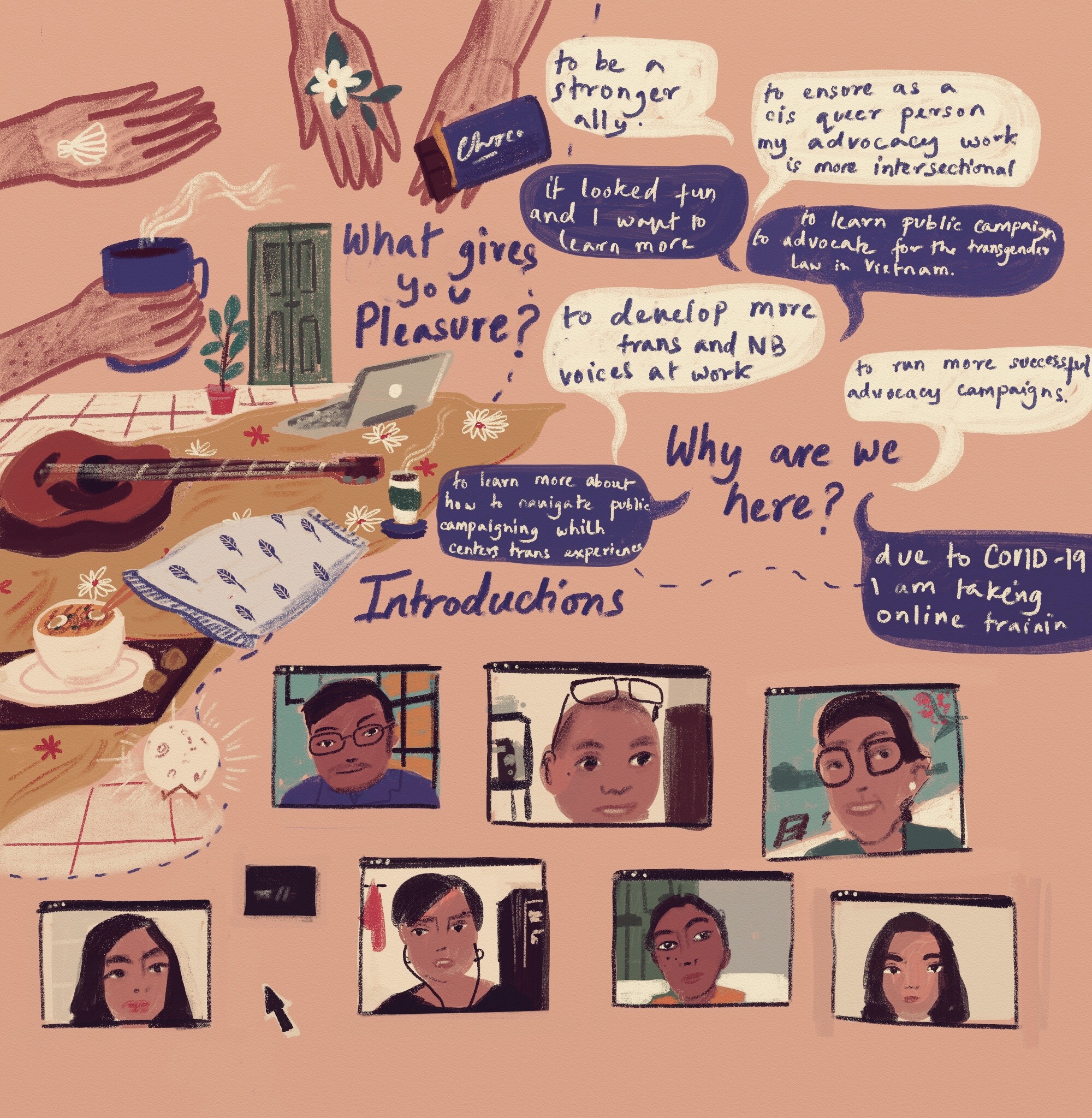 “Look around your space and your room, and share about one thing there which brings you pleasure. Even if we’re online, our bodies are still here and important that we ground both, and ground it in pleasure,” says Jac sm Kee after inviting us to put on our cameras briefly if possible. This is the beginning of the first workshop in APTN’s #SkillsforChange: Public Campaigning For Advocacy and Social Change online workshop series held on 31st July 2020.

Jac sm Kee, a feminist activist working at the intersection of internet technologies and human rights, started the session with a collaborative sharing of the campaigns that we know, and what about that campaign was really great, and to unpack what worked, and what stayed with us.

Some of the campaigns that came up in the discussions with workshop participants include Girls at Dhabas, which ruptured not just the physical public spaces of dhabas but also the public spaces of social media where photos of women in dhabas were posted, Jagal (The Act of Killing) a documentary film on the genocide in Indonesia which played an important role in which the history was remembered, #FridaysForFuture started by Greta Thunberg to address the climate crisis, and many more. The links between the online and offline which expands spaces, and the body being the connecting point between the two was highlighted through the examples shared.

Jac emphasised on the need for solidarity and allyship at such instances.

It is also important to remember that we have always been using the online space in some way or another. Right now, especially in the times of COVID-19, we are working on thinking and planning for using the online spaces more intentionally, reminded Jac. One of the key things that has emerged from the expanding of space using the internet is that the constellation of actors involved has expanded much, much more.

Jac highlighted the need to remember and think about these varied actors when we map stakeholders when planning a campaign, and move beyond the traditional stakeholders like law makers, NGOs, the media etc. Social media activists, who use the social media spaces for speaking about different things and running campaigns, and nerd collectives like gamers, comic book nerds, those into fan fiction etc., are some of the actors in this expanded constellation of actors. They are also people who are already in these spaces and can be mobilised and activated into action. Free radicals are actors who we may forget in our organising. They are trainers, facilitators, people who move from movement to movement contributing their skills, and contribute to the campaigns with a range of skills. Are we engaging them when we are designing campaigns?

The increasing crackdown on speech and expression in the online spaces, ban on social media platforms such as Tik Tok in different countries, and the money put into organising troll armies to silence dissent, especially from women, queer and trans persons, and other marginalised communities highlight this fear around the digital spaces by those in power.

The participants went into breakout rooms to map stakeholders, first identifying allies, neutrals, and those in direct opposition. There was a discussion on the need to create arguments against things said by those in direct opposition, how to move those who are neutral towards your cause, and actions needed to mobilise the allies. The stakeholders were then mapped in terms of the power wielded by each one.

Jac’s session was an excellent introduction to how we think about public campaigns in the digital spaces, and on expanding our pre-existing notions of space, actors, and what can be done through subversion and hacking spaces. The immersive session set tone for the following sessions which delved more into public campaigning.

This workshop was the first in a series of four workshops about Public Campaigning for Advocacy and Social Change. Click here to find out more about the series, resource persons, and read the other blogs.