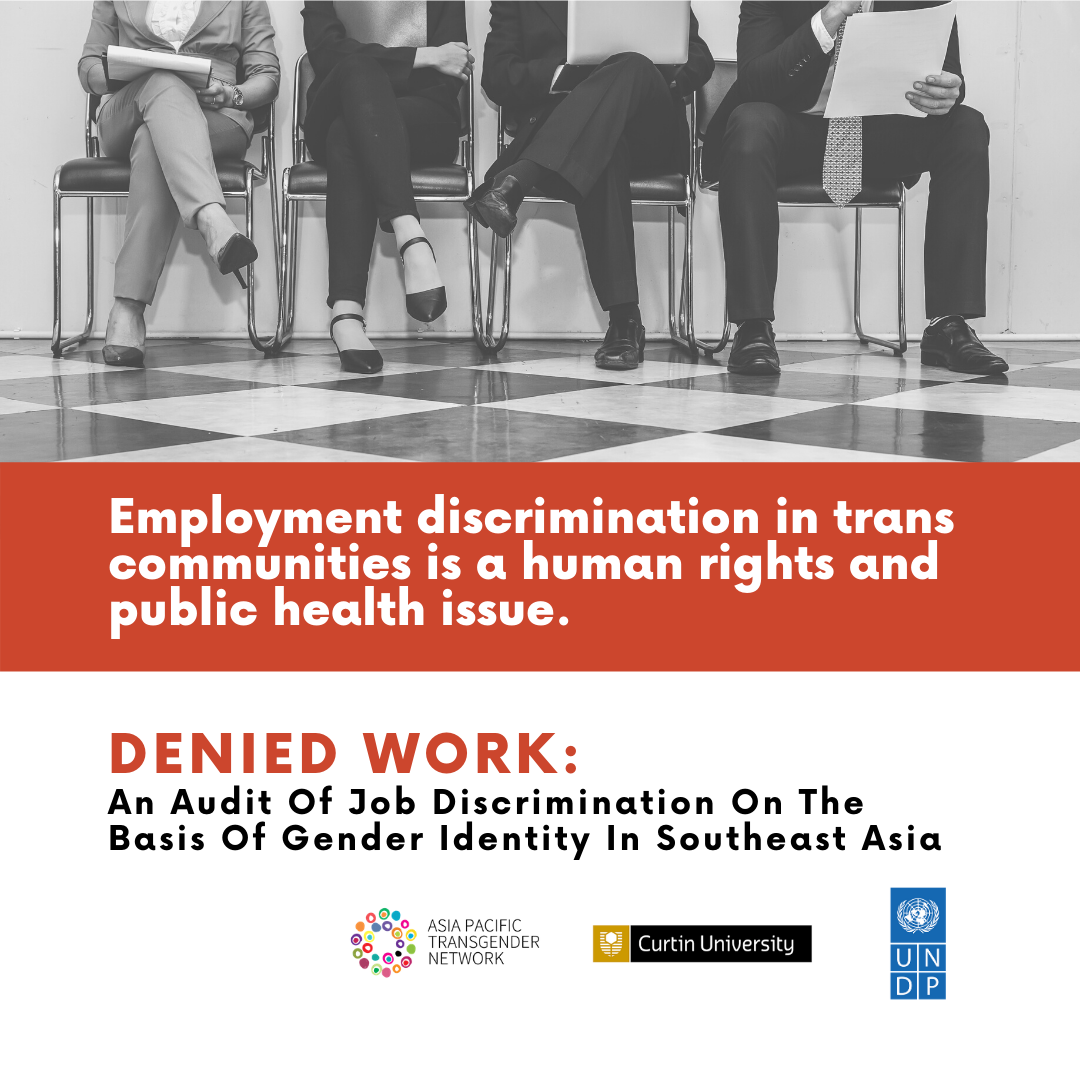 National Coming Out Day is coming up on Sunday, October 11th 2020. In line with this day, APTN has developed a social media campaign officially releasing the results of the 2019 Denied Work report conducted in partnership with Curtin University, and supported by UNDP’s Being LGBTI in Asia and the Pacific programme.

This Social Media Tool Kit contains graphics and recommended copy that can be used on social media, to highlight the inequalities discovered in the Denied Work study when it comes to the employment of trans and gender diverse individuals in Southeast Asia.

For each country-specific day, we have both English and translated graphics available. If anyone would like to help translate the other posts into your local language, please reach out to Cole at cole.young@weareaptn.org.

We invite you to join us in this campaign. The suggested publishing period for the graphics and copy in this Social Media Tool Kit is over 6 days, from the 5th of October to the 11th of October 2020, which is National Coming Out Day.

Employment discrimination in trans communities is a human rights and public health issue. Yet, few jurisdictions in the region have effective anti-discrimination legislation to provide protection against discriminatory hiring practices, including forcing transgender persons to come out as part of the job interview process.

In Malaysia, state-enacted Islamic laws in all 13 states explicitly criminalise the gender expressions of transgender people, and gender affirmation surgeries are haram (forbidden). For many trans people, presenting themselves in their gender identity for the purpose of employment causes penalties such as fines, arrest, and detention.

While Singapore has one of the more progressive legal landscapes for trans people in Southeast Asia, anti-transgender bias and discrimination are not against the law. Sexual orientation and gender identity are not clearly understood by the general public, and one study of LGBT people broadly reports that 15% of LGBT employees report experiencing some sort of discrimination in employment.

Thailand has a long cultural history with respect to trans feminine people (people who were assigned male at birth and transition to live as women), known in Thai language as kathoey (กะเทย) or colloquially as “ladyboys”. There is no similar history for trans masculine people (people assigned female at birth who transition to live as men), who are distinct from toms (ทอม)(people who are assigned female at birth and female-identified while expressing a masculine gender presentation).

Vietnam has a cultural history of respect towards trans people, particularly in the context of cultural and traditional roles. However, in more recent times, transphobic stigma and discrimination have taken root. Furthermore, sexual orientation and gender identity are not explicitly separated as concepts in general discussion; trans feminine people (assigned male at birth who transition to live as women) are often considered to be a more visible and extreme form of gay men, whereas trans masculine people are largely invisible.

Trans people commonly report being discriminated against in relation to jobs. As is evident from the data in our Denied Work reports, discrimination is apparent even at the first step in recruitment – the application. More must be done to break down existing barriers and create a fairer environment for trans and gender diverse people seeking employment.

We call for stakeholders to take up these 6 recommendations for approaches to reduce discrimination in job hiring based on gender identity.

UNDP’s Being LGBTI In Asia