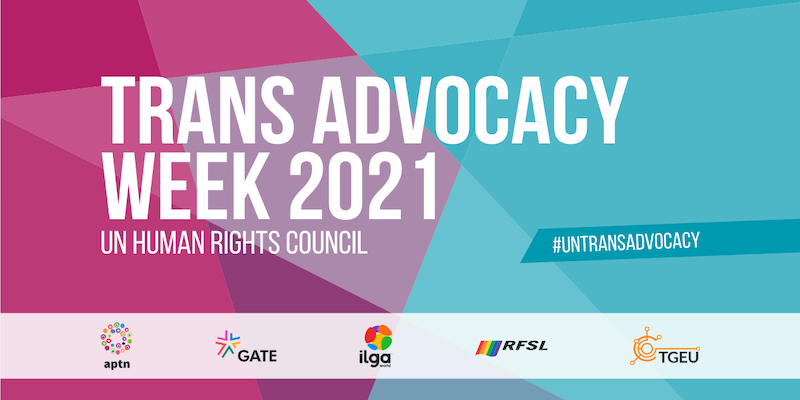 Geneva, 21 June 2021 – For the fifth year in a row, trans and gender diverse activists from all over the world will come together during the June/July session of the United Nations Human Rights Council, to raise awareness of the human rights situation of their communities with diplomatic missions and UN bodies in Geneva.

The UN Trans Advocacy Week is a collective project of the Asia Pacific Transgender Network (APTN), GATE, ILGA World, the Swedish Federation for LGBTQ Rights (RFSL), and TGEU. First held in 2017, the initiative has supported dozens of activists to address trans people’s human rights at the UN, and to increase their visibility and leadership in decision-making processes at the international level.

In 2021, due to restrictions caused by the ongoing COVID-19 pandemic, Trans Advocacy Week will happen virtually. Activists will hold a series of private meetings with human rights bodies and country missions, as well as engage in a series of public events to raise awareness of key issues affecting trans communities worldwide.

During these discussions, activists will address the ongoing epidemic of violence against trans women and discuss how specific socio-economic issues are affecting people of diverse gender identities and expressions. Moreover, they will present positive examples of how cisgender and trans activists have long been working together in feminist movements to advance the rights of all women, despite hostile narratives claiming otherwise.

These events come at a time when trans and gender diverse people are increasingly under attack across the world.  Wherever advances in trans human rights were made or proposed, regressions have occurred. These have often taken the shape of exclusionary movements, misguided narratives on so-called ‘gender ideology’, and right-wing politicians placing LGBT identities against national identities. A ‘perfect storm’ of moral panic is raging against trans people worldwide, combined with an uninterrupted wave of violence and murders, ongoing historic barriers to accessing healthcare, and increasing stagnation or regression on rights for trans people, all of which have been exacerbated by the consequences of the COVID-19 pandemic.

In such a critical time, occasions like UN Trans Advocacy Week are crucial for the world to hear directly from trans persons, and for governments to step up their efforts to protect trans human rights.