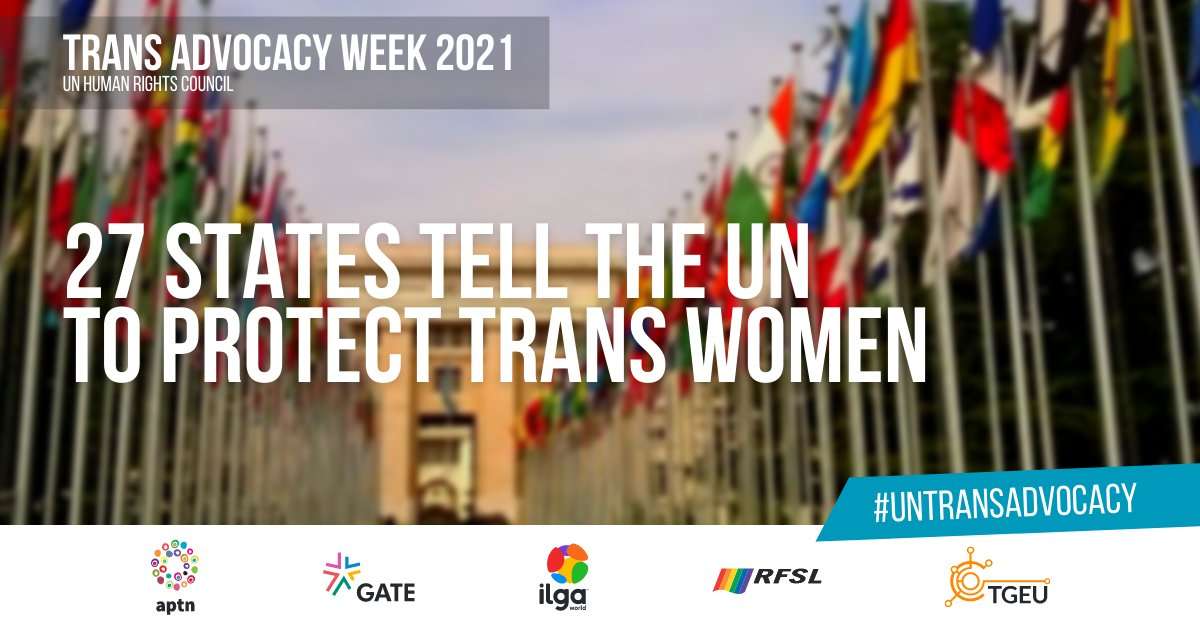 The statement was delivered by Chile on behalf of the 27 UN member States from the newly formed Group of Friends of the mandate of the UN Independent Expert on Sexual Orientation and Gender Identity1 during the Interactive dialogue with the Special Rapporteur on violence against women, its causes and consequences.

“Around the world,” Chile told the Human Rights Council on behalf of the group, “transgender and other gender diverse people face extraordinary levels of violence and harassment. We call upon member States, as a matter of urgency, to respect, to protect and to fulfil the human rights of transgender persons – especially transgender women, given the population’s historic marginalisation – by investigating rights violations and abuses, ensuring accountability, implementing effective antidiscrimination legislation and policies, and providing victims with direct access to an effective remedy and support services.”

“This is an historic step forward for the global trans community”, said APTN, GATE, ILGA World, RFSL, and TGEU, the organisations hosting the fifth edition of UN Trans Advocacy Week. “For the first time, States have taken the lead in recognising the historic injustices that people with diverse gender identities and expressions are still facing every day, and are pushing their own governments and others to work with civil society to raise awareness.”

Civil society has worked for years to highlight how persistent stigma and prejudice contribute to the vulnerability of trans and gender diverse people, pushing them into the margins of society and the labour market.  At the same time, the criminalisation of their identities fosters a climate of impunity for acts of violence against them, translating in a ‘perfect storm’ of human rights violations.

Research shows that there has been a steady increase in the global number of reported murders of trans and gender diverse people, with at least 3,664 murders documented since 2008.

As UN member States pointed out, trans women are “at heightened risk of and exposure to violence, killings, and other human rights violations and abuses.” Data from 2019 and 2020 show that 98% of those murdered globally were trans women or trans feminine people. In all likelihood, there are many more cases that risk not being reported at all.

Adding to this violence, trans and gender diverse people are also in the line of fire on other fronts, targeted both by anti-rights and anti-gender actors that seek to revert gender equality gains. During the 47th session of the Human Rights Council, women and LGBTI human rights defenders will come together for an event to reflect on the importance of building bridges, creating relationships of solidarity, and sharing examples of intersectional feminist action.

“We must remember that feminist and LGBTI struggles are intrinsically linked, despite hostile narratives claiming otherwise”, Trans Advocacy Week co-organisers pointed out. “States must create safe environments for people who do not conform to society’s gender norms.”

This is a joint statement by UN Trans Advocacy Week 2021 partners: