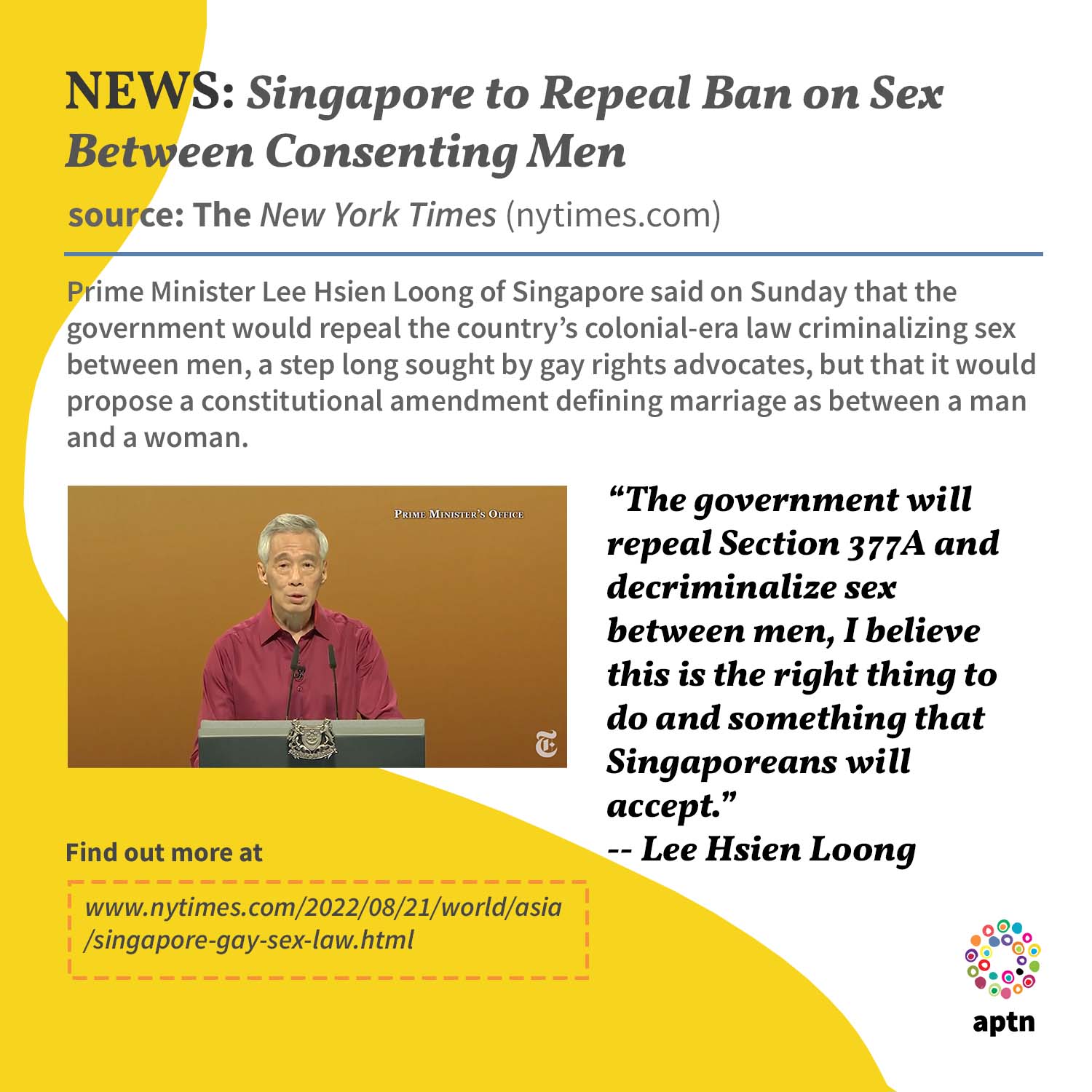 Reversing his opposition to decriminalizing gay sex, Mr. Lee said he believed that the conservative nation was willing to accept the idea of sex between consenting men and revoke the law, known as Section 377A. The law has not been enforced for 15 years but gay rights advocates had long sought to overturn it, arguing that it stigmatizes gay men and promotes discrimination. The law, enacted in 1938 during British rule, does not apply to women.

“The government will repeal Section 377A and decriminalize sex between men,” Mr. Lee said in his televised National Day Rally speech, an annual policy address. “I believe this is the right thing to do and something that Singaporeans will accept.”

At this year’s annual @pinkdotsg pride rally in June, participants highlighted how the law’s presence in the penal code encouraged discrimination against members of the LGBTQIA+ community in their daily lives.

Those advocating rights for gay people in Singapore have long argued that 377A, even if it is not enforced, perpetuates discrimination at all levels of society, including in schools, workplaces, health care and the media. Prime Minister Lee Hsien Loong finally took a step to repeal this law long sought by gay rights advocates, but he said same-sex marriage would continue to be illegal.

Singapore is the smallest nation in Southeast Asia by size but has outsize influence as a major shipping and commercial center. Its population of 5.7 million is a mix of Chinese, Indians, and Malay Muslims, who are largely traditional in their values. Southeast Asia as a whole is a conservative region and has been slow to recognize L.G.B.T.Q. rights; none of its 11 countries allow same-sex marriage.

A statement signed by more than a dozen L.G.B.T.Q. community groups in Singapore expressed relief about the repeal, but concern over a constitutional amendment.

“We urge the government not to heed recent calls from religious conservatives to enshrine the definition of marriage into the Constitution,” the groups said. “Such a decision will undermine the secular character of our Constitution, codify further discrimination into supreme law and tie the hands of future Parliaments.”

Reversing his opposition to decriminalizing gay sex, Mr. Lee said he believed that the conservative nation was willing to accept the idea of sex between consenting men and revoke the law, known as Section 377A. The law has not been...