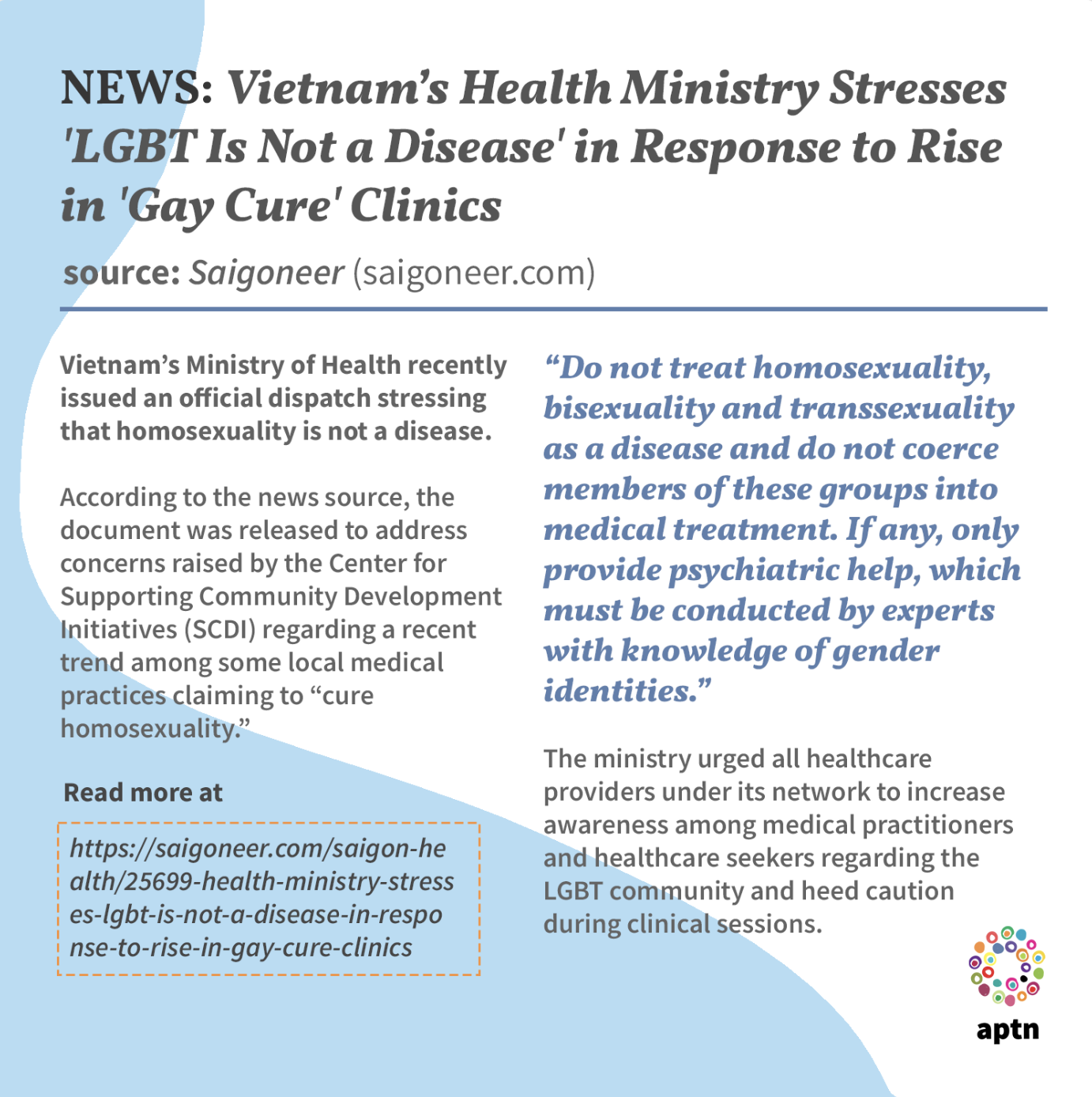 Vietnam’s Ministry of Health recently issued an official dispatch stressing that homosexuality, bisexuality, and ‘transsexuality’ is not a disease, hence urging to eliminate conversion therapy.

Nguyễn Thị Kim Dung, an official from SCDI, told the news source that her center has received various messages from members of the LGBT community who were taken to hospitals by family members to rectify their “homosexual illness.” Some worried parents also reached out to ask whether to seek treatment for their children. Capitalizing on this anxiety, a number of healthcare providers started advertising “homosexuality cures,” causing confusion among parents and distress for young queer Vietnamese.

In the official dispatch, as shared by the Institute for Studies of Society, Economics and Environment (iSEE), the Ministry of Health acknowledged the presence of these advertisements but did not name the medical facilities in question. The ministry quoted the World Health Organization’s (WHO) stance on homosexuality and its removal from the WHO’s list of mental illnesses in 1990.

The ministry urged all healthcare providers under its network to increase awareness among medical practitioners and healthcare seekers regarding the LGBT community and heed caution during clinical sessions.

These include: “Do not treat homosexuality, bisexuality and transsexuality as a disease” and “Do not coerce members of these groups into medical treatment. If any, only provide psychiatric help, which must be conducted by experts with knowledge of gender identities.”

This is a piece of major news in the depathologisation of LGBT identities in Southeast Asia. We hope more governments in the Asia Pacific to officially declare a similar statement with Vietnam’s Health Ministry!

If you want to read more, please go to this link:
saigoneer.com/saigon-health/25699-health-ministry-stresses-lgbt-is-not-a-disease-in-response-to-rise-in-gay-cure-clinics

APCASO serves the role of Asia Pacific Regional Platform on Communities, Rights and Gender (APCRG) for the Global Fund. Our primary aim is to deliver timely and relevant information and tools, including information on technical assistance opportunities, to promote effective...

Vietnam’s Ministry of Health recently issued an official dispatch stressing that homosexuality, bisexuality, and ‘transsexuality’ is not a disease, hence urging to eliminate conversion therapy.

Nguyễn Thị Kim Dung, an official from SCDI, told the news source that her center...