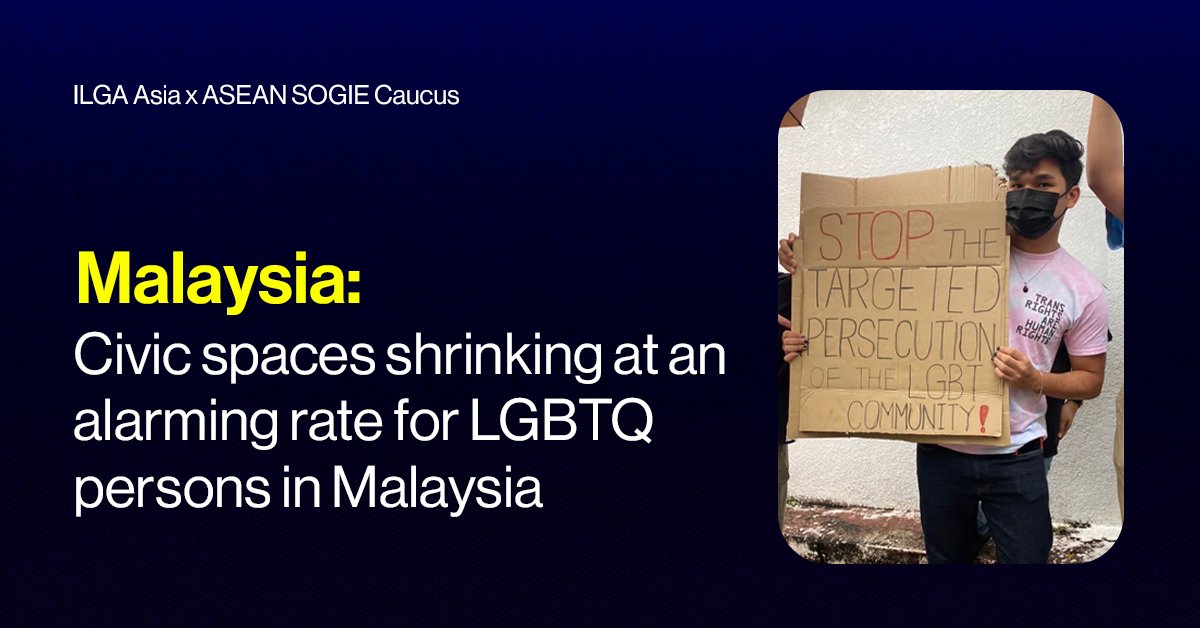 Together with 66 organisations, ASEAN Sogie Caucus and ILGA Asia express concern over the recent raid of a social gathering in Kuala Lumpur and the shrinking civic spaces for LGBTIQ person in Malaysia.

In the wake of Halloween celebrations, the Royal Malaysia Police (PDRM), the Federal Territories Islamic Religious Department (JAWI), and the Kuala Lumpur City Hall (DBKL), conducted a joint raid of a social gathering attended by people of diverse sexual orientations, gender identities and gender expressions (SOGIE), including LGBTQ persons. The raid which took place on October 29, 2022, resulted in the arrests and interrogation of at least 24 gender-diverse persons. Those arrested were alleged to have committed unclearly defined violations such as “encouraging vice” and “indecent acts”; the use of ‘illegal substances’; and for freely exercising one’s gender expression. All persons have been released on bail, and awaiting further action.

Sharing of experiences by the attendees and monitoring by LGBTQ human rights groups responding to the raid show a number of critical human rights violations. They reinforce the ongoing trend of state actions that suggest discriminatory intent to persecute and shrinking spaces for LGBTQ people to live with dignity.

During the raid, the attendees were segregated based on religion and gender: gender-diverse persons identified as Muslims were targeted, vilified, mistreated, misgendered, and slapped with charges for violating the Syariah Criminal Offences Act. Trans and gender-diverse people reportedly experienced degrading and humiliating treatment while undergoing urine tests by the police.

Meanwhile, during the statement-taking process, the 18 persons who were investigated for “posing as a woman” were subjected to degrading or irrelevant questioning to probe whether they have undertaken hormones, or had undergone surgeries. Such questions contravene the right to live with dignity and privacy, especially on matters related to health and bodily autonomy.

The raid is the tip of the iceberg of the rising and systemic discrimination and persecution faced by LGBTQ persons in the country. The Malaysian government continues to criminalize and persecute LGBTQ persons in both its civil law, specifically the colonial remnant that is Section 377 of the Penal Code (commonly referred to as the anti-sodomy law), and state-Syariah Laws. in addition, the state-led promotion of ‘rehabilitation’ or so-called conversion practices or SOGIE change efforts is equally worrying, and further drive low-self acceptance among LGBTQ persons. This context increases LGBTQ people’s vulnerability to punitive and arbitrary measures.

Freedom of assembly and expression of LGBTQ persons have continued to erode since the police ban on Seksualiti Merdeka in 2011. Many LGBT events have been cancelled due to backlash from state and non-state actors; some have faced threats of state investigation. Businesses that employ LGBT performers and are frequented by LGBT persons operate under the radar due to fear of raids. LGBT events organisers have also reported to LGBT groups that their events are sometimes visited by police officers of various ranks. Events and activities that have visible inclusion of LGBTQ persons have been met with heavy-handed state responses. In 2019, following the visible participation of LGBT persons and allies at the women’s march, the police took stern actions by investigating the organisers under the Sedition Act.

These events together with the existing and rising LGBTphobia have had a chilling effect on freedom of assembly and expression, including online and offline organising, and the ability for LGBTQ-affirming businesses to operate without harassment or fear. Due to fear of police raids and the safety of LGBTQ attendees, LGBTQ events remain closed and small. In this context, human rights defenders, activists, organisers and even businesses find it challenging to organise, support and undertake critical awareness raising and community building, which are much needed to address the isolation and disenfranchisement faced by LGBTQ persons and the hostility against LGBTQ persons.

With the rise of conservatism marked by the confluence of right-wing politics and conservative religious sentiments, there is real-life danger for LGBTQ persons, a cause for worry within the Southeast Asian region. A report by Justice for Sisters revealed the serious negative impact of anti-LGBTQ sentiments on the mental health and well-being of LGBTQ persons, including increased stress, fear over personal safety, and resorting to self-censorship.

“I was anxiously waiting for my friends to be released from Rex KL and JAWI. I felt really powerless and all I can do is to keep them company via texts and ask community organizations to help. We need to do more as a community. We need to ask ourselves, what will happen when the next raid takes place?”

“The recent event makes you wonder if the same fundamental liberties enjoyed by others are shared with the LGBTIQ+ persons in Malaysia. The blatant violations, degradation, and humiliation of a person due to their SOGIE is an act of human rights violation. LGBTIQ+ persons must express their anger at the ballot box. Show them we matter, we belong, and our voices will be heard!”

3 other undisclosed organisations from Malaysia, Myanmar and Singapore.*

*Names of organisations not disclosed due to security reasons

*Names of individuals not disclosed due to security reasons

Section 377A: Any person who has sexual connection with another person by the introduction of the penis into the anus or mouth of the other person is said to commit carnal intercourse against the order of nature.

Section 377B: Whoever voluntarily commits carnal intercourse against the order of nature shall be punished with imprisonment for a term which may extend to twenty years, and shall also be liable to whipping.

Section 377D: Any person who, in public or private, commits, or abets the commission of, or procures or attempts to procure the commission by any person of, any act of gross indecency with another person, shall be punished with imprisonment for a term which may extend to two years.

Section 25 (Liwat) – Any male person who commits liwat shall be guilty of an offence and shall on conviction be liable to a fine not exceeding five thousand ringgit or to imprisonment for a term not exceeding three years or to whipping not exceeding six strokes or to any combination thereof.

Section 26. (Musahaqah) – Any female person who commits musahaqah shall be guilty of an offence and shall on conviction be liable to a fine not exceeding five thousand ringgit or to imprisonment for a term not exceeding three years or to whipping not exceeding six strokes or to any combination thereof.

Section 28 (Male person posing as woman) – Any male person who, in any public place, wears a woman’s attire and poses as a woman for immoral purposes shall be guilty of an offence and shall on conviction be liable to a fine not exceeding one thousand ringgit or to imprisonment for a term not exceeding one year or to both.