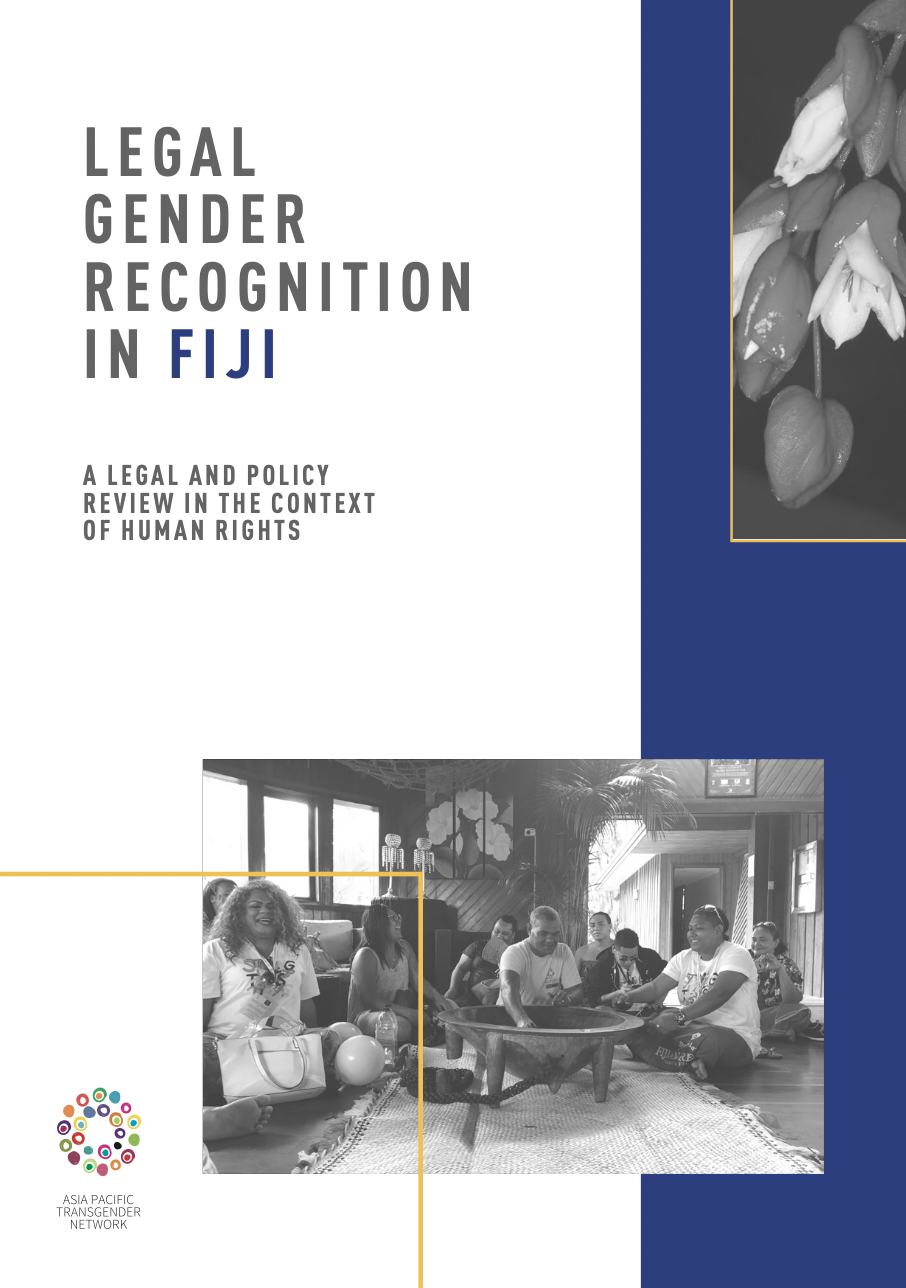 The 2013 Constitution of Fiji enshrines protection from discrimination on the grounds of sex, gender, sexual orientation, gender identity and gender expression. Fiji is currently the only Constitution in the world that covers anti-discrimination on the grounds of gender expression. Despite this powerful protection, the legislative, policy and institutional framework of Fiji does not legally permit any change to gender markers nor is there any legal recognition of Fiji’s traditional third gender identities. There is limited scope in official and administrative documents allowing for self-determined gender.

Laws, regulations, policies and court decisions continue to follow Fiji’s colonial past of defining gender and sex in a fixed binary way, with only a male and a female category that cannot be amended. This legal vacuum in terms of recognising transgender people perpetuates marginalisation, exclusion and discrimination. The inability to obtain identity documents reflecting self- determined gender identity or expression results in unequal access to public services such as education, healthcare, employment, housing, social welfare benefits and restricts access to justice.

The transgender community is not widely represented in the public, private or political sector. These vulnerabilities are aggravated in times of humanitarian crisis or by intersectional discrimination such as poverty, ethnicity, social class, economic status, age, and for those in rural areas or living with disability or HIV or albinism.

In Fiji, patriarchy is entrenched in both the iTaukei (ethnic Fjiian) and Indian (Fijians of Indian descent) cultures. Conservative cultural and religious values create barriers for acceptance of transgender people particularly on the basis of their actual or perceived gender identity or sexual orientation. Traditional views about the roles of men and women, including within the family, restrict acceptance of gender diversity. The media contributes to negative rhetoric against the transgender community, which influences the mindsets and attitude of many in Fijian society. This sustains a culture of intolerance, violence and hate against transgender people.

Recent anti-discrimination provisions in revised employment, education and healthcare policies and laws offer protection under the ground of sexual orientation. However, these are limited in their protection of transgender people’s gender identity or expression (or for intersex people from discrimination based on their sex characteristics).

There are also progressive developments in criminal law from the decriminalisation of homosexuality to broadening the definition of ‘rape’ to include offences against ‘any person’, however sex work is still criminalised in Fiji. De facto relationships are legally recognised; however, this is limited to heterosexual partnerships only. Fiji’s laws do not permit same-sex marriage nor recognise civil unions and same-sex marriages from outside jurisdictions.

Health laws do not pathologise gender non-conforming people and forced sterilisation is illegal. However, there is very poor understanding of trans related health with limited access to hormone replacement therapy (HRT) or facilities providing gender-affirming care.

Interviews with State and law enforcement agencies on legal gender recognition for transgender people demonstrated a genuine commitment to review policies, regulations and practices to be more inclusive. Those interviewed from government agencies welcomed being informed of legal protection for the transgender community to achieve its broader social goals to reduce discrimination, poverty, inequality, social and economic exclusion, prevent violence and uphold equal rights to education, employment and healthcare for transgender people.

The transgender activists and community who participated in consultations strongly support the introduction of legal gender recognition in Fiji to both strengthen their legal protections and promote dignity and respect for gender diversity.

The author of this report and national consultant is Kavita Naidu, a human rights lawyer based in Fiji.

The Haus of Khameleon has been the country implementing partner / sub-grantee in Fiji for this project. Haus of Khameleon is a social justice organisation in Fiji, led by transgender women who are working to end discrimination and violence against transgender people through national, regional and global education and advocacy work. They co-organised the two LGR roundtable discussions, followed-up with partners for feedback on the report, and were the local community contact point for the national consultant.

APTN would also like to acknowledge the important contributions made by: