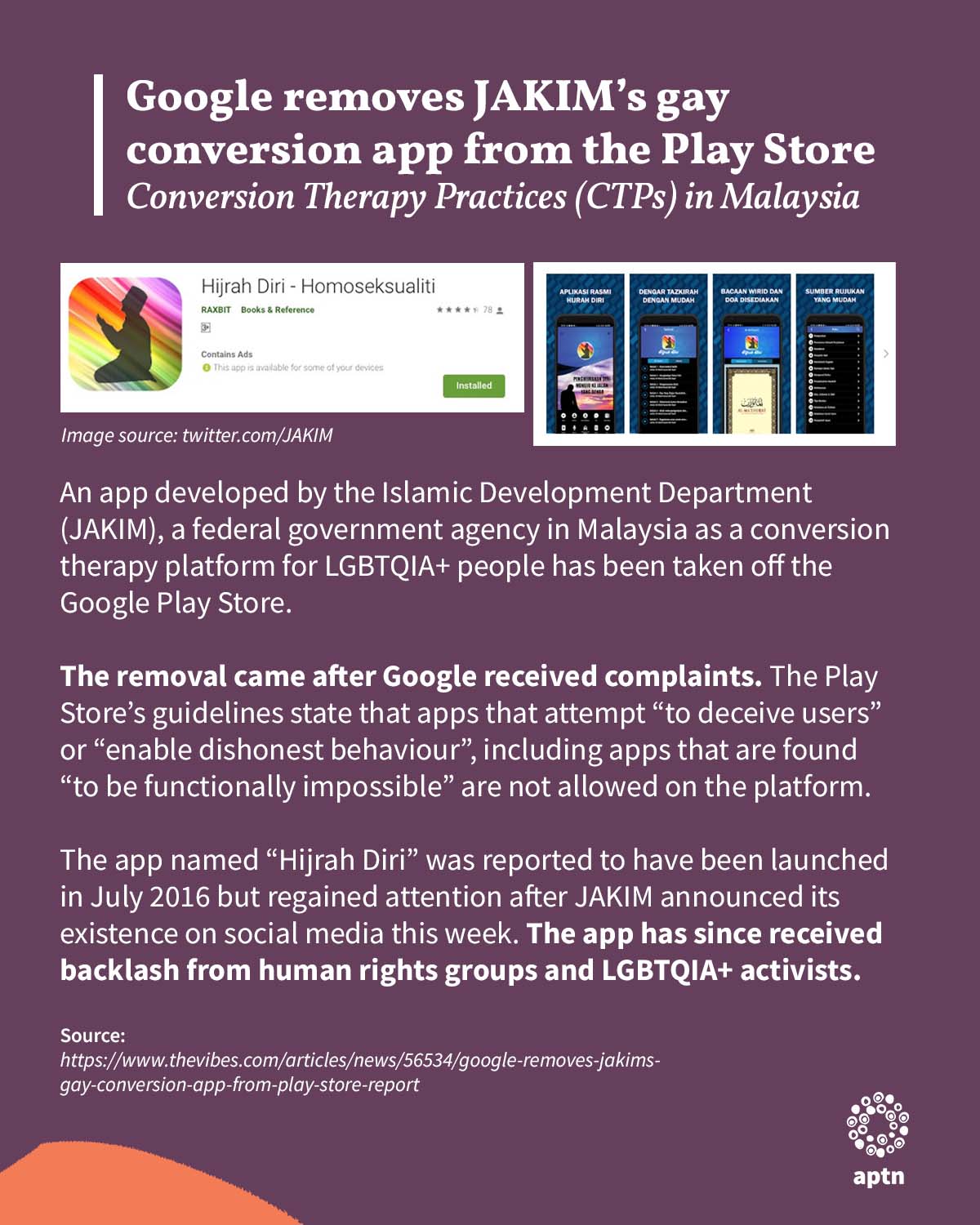 An app developed by the Islamic Development Department (JAKIM), a federal government agency in Malaysia as a conversion therapy platform for LGBTQIA+ people has been taken off the Google Play Store.

The removal came after Google received complaints. The Play Store’s guidelines state that apps that attempt “to deceive users” or “enable dishonest behaviour”, including apps that are found “to be functionally impossible” are not allowed on the platform.

The app named “Hijrah Diri” was reported to have been launched in July 2016 but regained attention after Jakim announced its existence on social media this week. The app has since received backlash from human rights groups and LGBTQIA+ activists.

Trans people are subject to arrests, fines, and judicial corporal punishment under a number of sharia provisions that cover both sexual orientation and gender identity. CTPs in Malaysia are perpetrated by parents, school systems, religious institutions, and the state, which disguise CTPs as religious education programmes (such as the Mukhayyam programme) or programmes for Hijrah Diri (self-pilgrimage) e-book.

Who are the perpetrators?
Our research includes testimonies from both transmasculine and transfeminine people as others such as activists, psychologists, lawyers, and progressive Islamic scholars.

– 62% of the interviewed trans people stated that a parent or parental figure had tried to change their sexual orientation or gender identity
– 31% mentioned that they had been subjected to CTPs either by religious authorities or a religious institution.
– 54% mentioned being subjected to CTPs from multiple sources

What does Conversion Therapy Practices (CTP) look like in Malaysia?
Some of the practices include showing trans women videos about death and dying (to strike the fear of God in them) and forcing them to participate in strenuous physical activity in the hope that it will make them more “masculine”. There are also a number of private Islamic healing clinics which “treat” LGBTI people through the recitation of Quranic verses and the spraying of black pepper seeds over their eyes, purportedly to expel Satan from them.

How does anti-trans legislation in Malaysia affect trans communities?
Trans men
As the law treats trans men as women, and because it criminalises homosexuality as well, they may be charged for engaging in musahaqah (sexual activity between women), attracting fines of up to RM 5,000 (USD$1,200), imprisonment of up to three years, or judicial corporal punishment of up to six strokes of a cane, or a combination of the three.

Trans women
Trans women are subject to arrests and/or fines under state sharia laws that criminalise “a man (who wears) a woman’s attire or poses as a woman for immoral purposes.

Conversion therapy is cruel, inhuman and degrading.
Conversion ‘therapy’ is not informed by any scientific principles and has been banned by many countries, including India. Such practices are unethical and harmful, causing immense trauma in subjects forcibly subjected to CTPs.

You can read more about Conversion Therapy Practices in Asia here:
https://bit.ly/CTPTrans
If you want to know more about APTN’s work in resisting transphobic practices, join our mailing list on bit.ly/APTNnewsletter